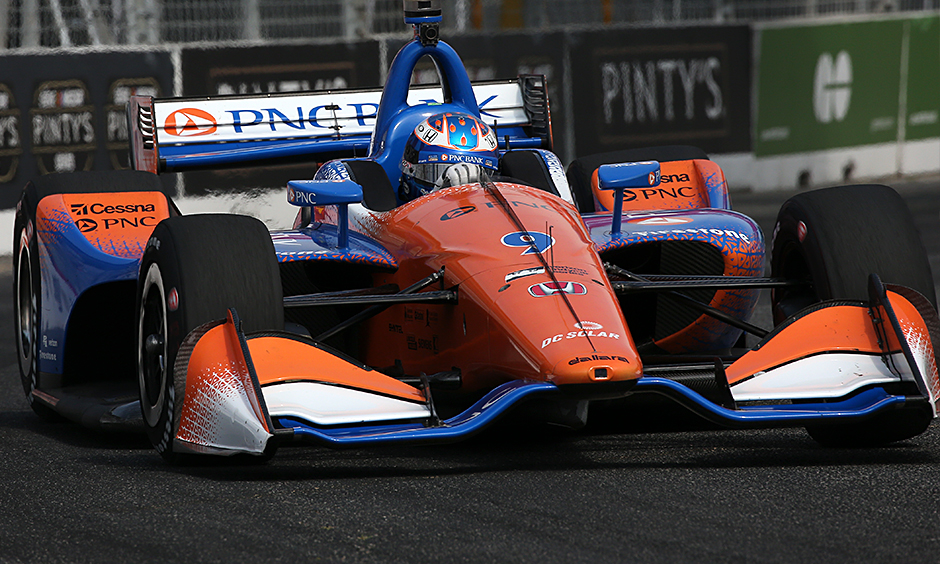 Scott Dixon lived up to his nickname, “The Iceman”, on a crazy, crazy day at the Indy Toronto.

Earlier in the week it was announced that Conor Daly would drive the Harding Racing car for an unspecified number of races, as they evaluate potential teammate options for Gabby Chaves. Chaves remains contracted to the team for the rest of this year and next year.

In mixed conditions last year’s winner and defending champ Josef Newgarden took pole ahead of championship leader Scott Dixon. The other two Penskes of Simon Pagenaud and Will Power were next ahead of the two Andretti cars piloted by Alex Rossi and Ryan Hunter-Reay. The hometown heroes James Hinchcliffe and Rob Wickens shared the fifth row.

It was a glorious, hot, sunny day as the cars went to the green flag. The first lap was absolutely insane with too many positions exchanged to be adequately described with words. At the end of it all JoNew led Dixie, RHR, Power, Takuma Sato, Rossi, Wicky Bobby, Pagenaud, Marco Andretti, who was up from 14th and Hinch.

Not a huge amount happened early on, then Ed Jones came in the pits of lap 12, only to stall. The end result was a lot of time lost and he came out right in front of JoNew and Dixie! This meant he could hold JoNew up for his teammate Dixie, prompting people who think the world is flat to lose their marbles. The first round of stops happened without too much drama apart from Power overhauling RHR for third having saved fuel and stayed out an extra lap.

However, shortly afterwards things started to go mental. RHR passed Power, who had damage on his rear end, only to lock up and go straight into the tyre wall at the next corner! Just behind that, Rossi also tried to pass the ailing Penske only to mistime the pass and break his front wing on the Australian’s car! This caused a full course yellow and the three protagonists to head to the pits.

On the restart JoNew did something incredible. Not in a good way though. Coming out of the last corner he got onto the marbles on the outside and understeered wide until he clipped the wall. This lost him all momentum, allowing Dixie to take the lead and five other cars to get past.

Down to turn 3 and all hell broke loose at the back of the pack. Graham Rahal locked up and hit the back of Max Chilton. As he came back into line, Graham got tipped into a spin by Jones and as he spun Rossi touched wheels with him, launching the Andretti car into the car. RHR and Power had nowhere to go, with Captain America hitting Graham, who was facing the wrong way, and Power locking up and going into the tyres. Cue another yellow.

There was another restart on lap 40, only for another yellow to happen when Rene Binder stopped with mechanical problems. At this time the order was Dixie, Wicko, Pagenuad, Marco, Taku, Tony Kanaan, The Mayor of Hinchtown, Charlie Kimball, Zach Veach and Daly.

The last restart came on lap 45 and everything was steady until the last stops. Wicky Bob came in on lap 54 with Dixie following a lap later. Marco and Pagenaud were last of the top guys in on lap 56. The Frenchman came out a fraction ahead of Wicko, who promtly decided to see how close he could inspect he Penske’s rear end. They went side-by-side down to turn 3, both on push to pass. Wicky Bob on the outside, Pagenaud the inside. They braked at the same time, banging wheels and the Canadian attempted to go the long way round. Pagenaud was having none of it and gave his rival the choice of crashing into him, the wall or backing off. Wicko wisely chose the latter.

Fast forward ten laps or so and Taku did the same thing as JoNew, damaging his right rear and putting a disappointing end to another strong drive.

With 20 to go Dixie came up to lap RHR but couldn’t get passed, allowing Pagenaud to close. With 15 to go, good news for the Kiwi! RHR made a dive for the pits and he promptly set the fastest lap of the race, pulling a gap on his rival. Wicky Bobby then started to close again on Pagenaud as the Frenchman turned from hound to fox.

Another amazing drive came to a dispiriting conclusion as Marco was forced to pit for a splash and dash at the beginning of the last lap, after a huge miscalculation from his team.

But Dixie didn’t care about any of that. All he cared about was that he won for a third time in Toronto ahead of Pagenaud, Wicky Bobby, The Mayor, Kimball, TK and Veach. Rossi, JoNew and Marco managed to recover to the top ten, but RHR and Willy P wound up 16th and 19th.

This means that Dixie doubles his lead in the points to 62 ahead of JoNew on 402. Rossi is third on 394 with RHR and Willy P on 373 and 371, almost 100 behind the Ganassi driver. After it’s close between Wicky Bob, Pagenaud, Graham and Hinch; those guys are 27 points apart. Then a large gap to Marco, who rounds out the ten on 266.

Next up is another classic race, the Indy 200 at Mid-Ohio in a couple of weeks. Traditionally Dixie has massacred everybody here and with the form he’s in, that’s bad news for everyone else! See you then.