Patrick O’Donovan secured the British Rallycross Championship crown on a wet and wild day at Lydden Hill. He was able to win every session and took victory by almost 40 seconds.

In the final Patrick made the best launch in the rain and took the lead from pole position. Julian Godfrey, starting 4th followed the young racer through to take second ahead of Ollie O’Donovan. 2nd place start Tristan Ovenden was involved in contact with Steve Hill that saw the Kent racer fired off the road. Derek Tohill was the main beneficiary from this and slotted into 4th place.

On lap 2 Godfrey ran wide allowing Ollie O’Donovan a run past the 6-time champion. The pair made contact as Godfrey rejoined which gave the recovering driver a puncture. Ollie then squeezed Godfrey all the way to the apex but the positions remained the same. It was not long before the duo came together once more. They jokered together but with only 3 inflated tyres Godfrey was slower away down the start straight. Ollie caught up and went for a move down the inside. However, they made contact and it put the Focus driver out on the spot with broken steering. Godfrey could carry on and had a clear run all the way to the flag. 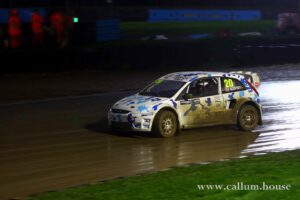 The rest of the cars were struggling through the extremely slippery conditions. Tohill was best of the rest and climbed his way to a podium position. Mike Sellar had a lonely race, getting into 5th at the start then jumping ahead of Ollie as he retired. Daniel Thoren on his British Rallycross debut was beset by car troubles. A gearbox issue and drive shaft failure put him off the pace. Steve Hill faired no better and suffered punctures on both his left side wheels.

Ollie O’Donovan and Ovenden were the only retirees with the DS3 driver pulling off on lap 2. After his opening corner crash his oil pump failed and he pulled off the track. Dom Flitney had been due to start the final but he missed the night time familiarisation session required to race at night.

Patrick O’Donovan avoided all the trouble to win by a staggering 38 seconds. Such was his performance there was confusion at the finish. The young racer was tucked up behind Hill’s Mitsubishi and he missed the checkered flag, instead completing a 7th “victory” lap. Immediately after the final he completed donuts in celebration of his title. Fireworks soon followed to end a rain filled day.

Patrick O’Donovan “I just kept my head down. I got a puncture on lap 2. I could feel it rotating a bit more at the top of the hill, not understeering any more. I just kept going to the end. As happy as can be with that.”

Patrick O’Donovan was unstoppable in the first of the semi-finals. Even a stall at the start couldn’t stop the top qualifier from retaking the lead. Godfrey led for most of the race but was passed on track just before the jump and had to settle for second. It was a big improvement from his qualifying performance where due to slight contact with Patrick and old wet tyres he qualified down in 7th. Hill slotted into third place. He was running second by a spin saw him drop a couple of positions. Sellar was able to pass Tohill late in the race to secure the last transfer spot.

With 2 to go Tohill suffered a double puncture and dragged him car towards the finish. He was initially out of the round but would transfer when Flitney failed to start night practice. Bradley Westgarth looked set to pass but when he caught up to the slowed car was unable to make a pass. Westgarth initially led in Q1 before being passed by Hill thanks to the extra power in his Mitsubishi Evo X.

The other Semi-final saw Ovenden win after making the best start. Ollie O’Donovan tried to challenge but wasn’t able to make anything stick. Dom Flitney cruised to 3rd, albeit over 30 seconds back from the leaders. Thoren struggled throughout the day and could only manage 4th in his semi, having qualified 10th. It was enough to make the final after returning champion Mark Donnelly retired at the start. The 2020 champion in back in a Citroen C4 this weekend and qualified 8th. In the 2nd semi-final he took the lead but immediately pulled off with a gearbox failure.

With his 7th victory in 10 rounds Patrick O’Donovan secured the 2022 Motorsport UK British Rallycross Championship at 18 years old. He becomes the youngest ever champion of the series and adds another O’Donovan name to the trophy after his father, Ollie won the title in 2007.

Patrick O’Donovan “I don’t think it’s fully hit me yet. I’m absolutely on a high but because it isn’t over yet I’m still a bit nervous going into tomorrow. My Dad did it 2007. Just really, really happy I get to do something I’ve grown up watching him do. To actually be able to win it, especially on debut year. Keep fighting for tomorrow and lost for words.”

Racing continues tomorrow with the final round of the season. Q1 starts at 10:30 with racing concluding by 4pm. 2 class champions in Junior and Swift are yet to be crowned with both title fights wide open.