IndyCar arrived in Long Beach, California for the second round of the 2017 season. Team Penske driver Helio Castroneves would lead the field to green with the resurgent Honda teams making up the rest of the top 5.

When the green flag waved Helio Castroneves would get off to a bad start allowing Scott Dixon to take the lead. Castroneves would be swallowed up by the rest of the top 5 before falling into sixth place by the end of the lap. 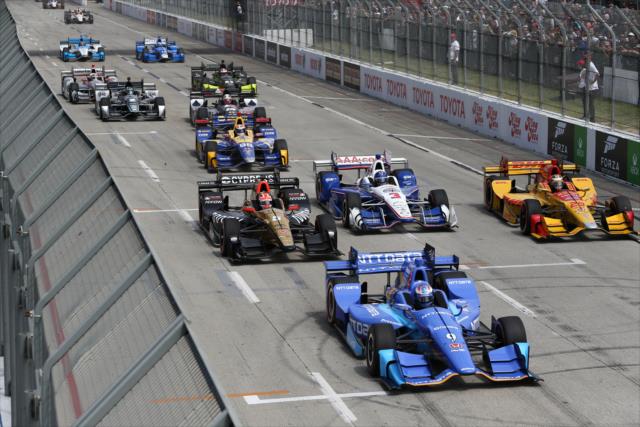 Between the leaders would not be the only action. Conor Daly would spin before even taking the green and Tony Kanaan would make contact with Ganassi Racing teammate Charlie Kimball sending debris down the front stretch for the rest of the field to avoid. Sebastian Bourdais would have a close with the debris.

The first full course caution would come just a few corners into the race when Charlie Kimball and Penske driver Will Power would make contact send both into the wall. The incident would knock Kimball out of the race with Will Power needing a new wing. The drivers would put the blame on each other with neither being penalized.

“To say I am frustrated with how today’s race went is an understatement,” said Kimball. “I thought I was clear of the No.12, but I obviously wasn’t. He turned me and put me in the wall pretty heavy. I am really disappointed for the guys – they worked so hard to get the car to a good place for today’s race. I thought we had a lot of potential for a solid result” said Kimball on the incident.

Powers take on the accident “I feel like it really ruined my day. It was an awful situation to be put in since we had nowhere to go when we made contact with the wall. Still, we battled. I’m really proud of my guys for working as hard as they did to try and come back from the incident, but we couldn’t”.

Takuma Sato, Sebastien Bourdais, and others would pit under caution.

The green would wave again on lap 5. James Hinchcliffe and Ryan Hunter-Reay would battle over the second spot with Hunter-Reay coming out on top from the battle.

A big talking point before the race would be the strategy with teams debating on a 2 stop or 3 stop race. Drivers going for the 3 stop race would start coming in the pits on lap 13. The first would Tony Kanaan and Simon Pagenaud.

On lap 14 Andretti Autosport’s Marco Andretti would start slowing while battling Mikhail Aleshin. Eventually, he would come to a stop in a runoff. The diagnosis was a stuck throttle with a loss of all power. 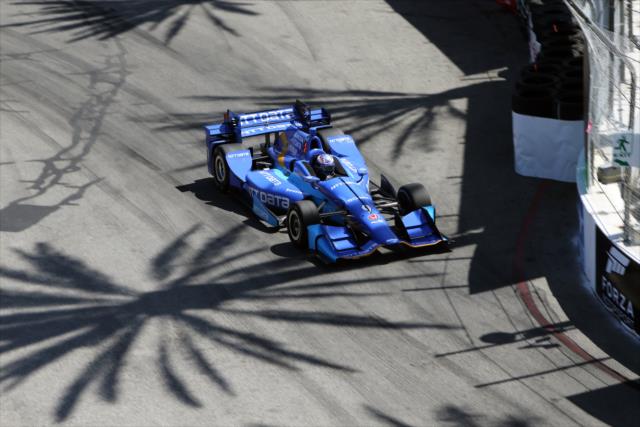 Another cycle of pit stops would come and see Josef Newgarden and Scott Dixon would battle for the lead. Newgarden running in second would pit before Dixon trying to undercut the 4-time champion. Dixon would pit on lap 63 handing the lead to James Hinchcliffe who was on a 2 stop and had pitted on lap 58.

Alexander Rossi’s day would end on lap 63 when his number 98 would come to a stop on the front straight due to an engine failure bringing out the second full course yellow. Polesitter Helio Castroneves would pit but unfortunately, be caught and penalized for speeding in the pitlane.

The green would wave with 17 laps to go with James Hinchcliffe leading. Third and Fourth place Sebastien Bourdais and Josef Newgarden would be held up by lap traffic helping Hinchcliffe and Hunter-Reay pull away.

A battle between Tony Kanaan and Mikhail Aleshin would ensue. The battle would end with Kanaan getting a puncture through contact with Aleshin.

Ryan Hunter-Reay would begin catching Hinchcliffe with 7 laps to go. Hunter-Reay’s teammate Takuma Sato would pull off the track with another engine issue. Just a lap later Hunter-Reay’s car would also stop but this time bringing out a full course caution.

The green waved with 4 laps to go as James Hinchcliffe pulling away once again due to a great restart. As Hinchcliffe pulled away Newgarden would be all over the back of Bourdais for the runner-up spot.

With 1 lap to go J.R. Hildebrand would make contact with Aleshin sending Hildebrand off into turn 1.

James Hinchliffe would take his 1st win since 2015 at NOLA Motorsports Park and the first since his near death crash at Indianapolis nearly 2 years ago. 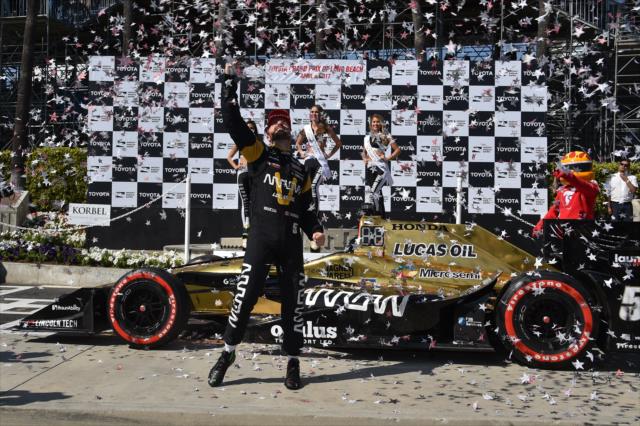 Sebastien Bourdais and Josef Newgarden would make up the rest of the podium as Bourdais second place would help him retain his point lead. 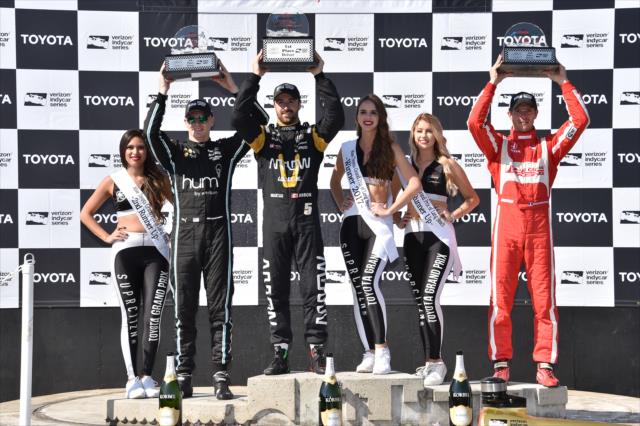 Rookie Ed Jones would come in sixth with yet another impressive showing for the emerging powerhouse that is Dale Coyne Racing. Another big storyline coming out of Long Beach would be Andretti Autosport with all 4 cars not finishing the race due to engine issues.

J.R. Hildebrand would suffer a broken bone in his hand in the crash and to this point not cleared for the next race at Barber Motorsports Park on April 23rd.